The Wall Street Journal has an excellent piece on how federal prosecutors and judges have so rigged the system that the only thing left to do when charged is to plead guilty, guilt or innocence notwithstanding. This clearly is an immoral situation, especially when innocent people plead simply to avoid the draconian sentences that are handed down when federal juries, in their usual Pavlovian style, listen only to federal prosecutors.

The article here follows the fortunes of Kenneth Kassab, who originally was going to plead guilty to an explosives charge because his attorney just did not want to take the risk of trial. After an incident, Kassab changed his plea, went to trial, and actually was acquitted. The diagram below, I believe demonstrates just how rigged the federal system has become: 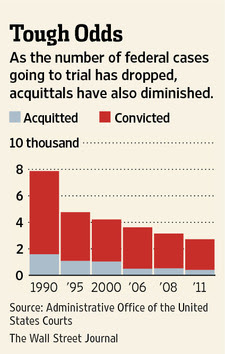 No doubt, federal prosecutors will claim that they garner in the convictions because they are great lawyers. However, in the words of Justice Antonin Scalia, who pretty much is pro-prosecution: (the federal system) "effectively compels an innocent defendant to avoid massive risk by pleading guilty to a lesser offense."

Sholom Rubashkin and the Unethical Judge

A couple years ago, I wrote on what I believed was a miscarriage of justice in the federal case against Sholom Rubashkin, the CEO of a now-shuttered kosher meat facility in Iowa. The Rubashkin case is one that draws a lot of different opinions, in part because there are so many elements involved from the hiring of illegal immigrants to accusations from PETA about mistreatment of animals to the issue of financial fraud.

I addressed each of those issues in a previous blog, but it seems to me that the worst part is the conduct of the federal judge in that case, Linda Reade, who immersed herself in the original immigration raid of the plant and who also seemed to have a role in directing how federal authorities should act. As Emily Bazelon wrote recently in Slate, Reade's involvement definitely seemed to cross the line of judicial impropriety:


Still, in asking the Supreme Court to take the case, Rubashkin’s lawyers—who now include former Solicitor General Paul Clement—are asking the justices to take a stand on Reade’s participation in the immigration raid planning. The argument is that Reade and the prosecutors had an obligation to tell Rubashkin’s lawyers about all that pre-raid planning. Except in very limited circumstances, judges aren’t allowed to meet with one side in a case without the other, and so those weekly meetings broke the rules. Several friend-of-the-court briefs have been written in support of Rubashkin’s position, or are on the way, and the signers include former judges and U.S. attorneys. One of the briefs was co-authored by my sister Lara, who is a clinical teaching fellow at the University of California Hastings law school, and lawyer Allison Ehlert.

In response, Reade and the government have said there’s nothing to see here. The judge attended all those meetings simply to save her court a headache. Her support for the raid was about logistics, nothing more, and there’s no reason that wearing her administrative hat would have biased her against Rubashkin once she put her judge hat back on. Maybe so. But judges aren’t just supposed to be impartial, they’re supposed to make sure they don’t create the appearance of bias. Wouldn’t it be better, as a general rule, if judges who meet regularly with prosecutors in advance of a cascade of high-profile indictments didn’t hear the cases that follow? Rubashkin’s prosecution was the culmination of the raid, in a sense. Getting him was the best way to justify the spectacle of the processing of the sad sack Guatemalans on the cattle fairground, which we know from her comments to the New York Times Reade felt she had to defend (and which another federal judge in Iowa later called a “travesty”).

The larger problem here is that, practically speaking, federal judges have enormous leeway in deciding whether to take themselves off a case because of potential bias or perceived bias. When they make a bad call, there are rarely any consequences. In all likelihood, the Supreme Court will turn Rubashkin down and refuse to intervene this time, too. The jury who convicted Rubashkin sat for 18 days and reviewed more than 9,000 exhibits, and the justices probably have as little appetite for a do-over as they do for smacking down Judge Reade. But even if you can’t bring yourself to care much about the fate of Sholom Rubashkin, the oddities of this case don’t sit well. Judges shouldn’t be able to make up their own rules for policing themselves.

While Bazelon is not sympathetic to the rest of Rubashkin's legal case (contrary to my own opinion), nonetheless I believe that when a large number of former federal legal luminaries are willing to file briefs with the court saying they have a problem with what has happened, then I believe this is not an ordinary situation. Like Bazelon, I do believe that the Supreme Court will defer to Reade's judgment, which I believe will be a terribly mistaken thing.

The Rubashkin camp has put out a video that I believe is worth watching, as it quotes my friend and mentor, Harvey Silverglate, and I believe it does make a good case for pointing out the travesties in this particular case. Yes, it does come from Rubashkin's supporters, but in federal criminal cases, we simply cannot depend upon either the government or the mainstream media (which generally adores federal prosecutors) to tell the truth.

The High Court is due to issue its decision on granting Rubashkin certiorari on September 24. Given the outrages that the SCOTUS already has unleashed in the past few years, I only can hope that for once in their lives the justices care about the things that judges and prosecutors actually do that either violate the law or are very suspicious. We shall see.

The recent acquittal of Autumn Rae Faulkner in Elkins, West Virginia, in which a jury deliberated for only an hour, provides ironclad proof that prosecutors, state and federal, should NOT be protected with any kind of immunity, period. When jurors take only an hour to acquit -- and having served as a jury foreman, I can tell you that much of that time was spent on activities besides talking about the case -- one can bet that they made up their minds even before the prosecution rested its case.

It is easy to surmise that prosecutors had NO case whatsoever, and either the so-called "experts" were the stupidest people in the room, or they were the most craven. I wish it were the former, but the latter dominates my thinking.

So, why did the prosecution bring the charges and destroy this woman's life in the first place? They did it because they can do it, and that is what they were telling everyone else. Prosecutors, you see, really don't care about guilt or innocence; they just love showing their authority, and since the U.S. Supreme Court has ruled that prosecutors have absolute immunity, they also know that no one in the system will hold them accountable.

In reading the article on the acquittal, I am struck by the utter arrogance that prosecutors had, and the way they dishonestly went about presenting evidence:

Following the trial, special prosecuting attorney Steve Jory said he didn't believe there was anything else the prosecution could have done differently that would have altered the outcome of the case.

"I think we presented every piece of evidence we had available to present," Jory remarked. "The case was fairly tried and the jury made its decision. Apparently they didn't believe we had enough evidence to prove our case."

But it gets even better:

Mazzei also highlighted the fact that the state hadn't presented any DNA evidence.


"The state took phones and [Faulkner's] computer, her couch, her comforter, bedding, a car, and no evidence ever came out of that that would prove Mrs. Faulkner was guilty," Mazzei said.

During his final statement, however, Jory told Mazzei that the prosecution wasn't able to present any DNA evidence because "you wouldn't allow your client and her husband to give (DNA) samples and we could not complete lab analysis." When asked after the trial if the court could have compelled Faulker and her husband, Scott Faulkner, to submit their DNA for testing, Jory said that it was possible, but the previous prosecutor in the Faulkner case -- former Randolph County Prosecutor Richard Busch -- had failed to do so.

When asked why he didn't later ask the court to order the Faulkners to submit their DNA for analysis, Jory simply said "there were a lot of factors" involved. (Emphasis mine)

As anyone familiar with criminal law knows, if the state wants evidence, it can get it. My sense is that the prosecutors and police did not seek DNA evidence because they knew there was none, it so leaving things in the realm of mere speculation where they could use innuendo would be more effective. (I imagine prosecutors already had convinced members of the media that Faulkner was a predator, but most journalists will believe anything cops and prosecutors say.) To claim to a jury that the state could not get evidence because the defendant and her attorney told them they could not get it fails to pass the laugh test.

But, when it comes to the use of innuendo, nothing tops this:


The state's evidence - or its lack thereof - was the subject of (Rocco) Mazzei's closing arguments Thursday.

Wow! So, prosecutors told the jurors that there were a great number of text messages, but did not show their content to jurors in hopes that they would be able to use their imaginations to surmise what Faulker MIGHT have written. As anyone familiar with teacher-student sex cases knows, text messages in the sort of situation prosecutors were alleging existed would have been filled either with sexual innuendo or outright graphic language.

What does this mean? It means that prosecutors read the messages and realized that not one of them were sexual, so they tried to deceive jurors, instead, by lying and suborning perjury.

Lord knows how much money Faulkner and her husband and family spent defending her against charges that obviously were false from the beginning. No doubt, the West Virginia school system will take its revenge by permanently sullying her record.

And what happens to prosecutors who financially ruin innocent people just because they can do it? Nothing. These are people who viciously ruined the lives of others in an attempt to make an obviously fraudulent case look to have substance.

Will the State of West Virginia take action? Don't hold your breath. Once again, we see why prosecutors should be sued; that is the ONLY way they will be held accountable.

Are these prosecutors the proverbial "bad apples" in a good barrel? Think again; in West Virginia, the entire barrel is rotten.