Radley Balko has a new article out that takes a more skeptical view of the left-right alliance on the expansion of federal criminal law, and I think his points are well-taken. Recently, I commented about the New York Times' recent piece on the efforts people have made from these two different sides of the political spectrum.

I believe he does an excellent job of laying the fundamental differences between conservatives, libertarians and liberals, and how libertarians bridge the gap, a gap that always will be there. Of the actual prospects for a meaningful alliance, he writes:

Still, the prospect of any sort of lasting alliance seems unlikely, mostly because conservatives, libertarians, and liberals view the legal system in fundamentally different ways. Conservatives believe the primary purpose of the legal system is to protect property and to promote order and stability. Liberals believe it's to promote equality—or to combat inequality. Libertarians put a premium on individual rights, favoring a limited legal system that serves only to protect society from those who cause direct harm to others or their property.

He follows this with a Venn Diagram which I think is excellent: 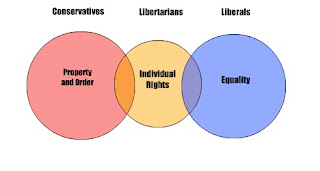 Indeed, we are talking about a huge gap. Somehow, I doubt that the people who are protesting the conviction and imprisonment of Lynne Stewart are willing to see that the convictions and imprisonment of Jeffrey Skilling of Enron or Jack Abramoff had no more basis in law than did Stewart's conviction. That is the tragedy, and it is how government uses Divide and Conquer to make sure that prosecutorial and judicial injustices will be a way of life in this country.
Posted by William L. Anderson at 4:03 PM

Mr. Balko discussed why libertarians are usually let down by both liberals and conservatives when either of them come into power (http://www.economist.com/blogs/democracyinamerica/2009/11/five_questions_for_radley_balk). He also discusses forensics and other problems in the criminal justice system.