A Trip Down Memory Lane: The CAC and LMJC "Let's Celebrate Perjury" Party

The week of Tonya Craft's "not guilty" verdict also was a week of many parties. Of course, Tonya and the others got to party in the Big Apple while "Alberto-Facebook" Arnt and Len "The Man" Gregor had a pity party with their good friends at Channel 9.

But, there also was another party, what I like to call a "Let's Support Perjury" get-together for the Children's Advocacy Center, where the Willow Tree Farms hosted "Casino Night" so people could raise money to allow for even more wrongful charges against innocent people and more perjury. Yes, a most memorable party.

I must admit that in my circles, the notion of committing perjury would be anathema. If someone in our church lied under oath, he or she would be disciplined and likely excommunicated; at the Eastwood Church, perjurers are held in great honor. Likewise, they are proud of their lies at the CAC, and Perjury Central held a party to celebrate dishonesty.

Now, lest the people at Willow Tree Farms believe I am picking on them and holding them up to ridicule for hosting this wretched event, they are correct. I have no respect at all for people who celebrate lies and who raise money for people so they can commit more perjury and destroy innocent lives. As far as I am concerned, the Willow Tree Farms might as well host a party for Planned Parenthood and celebrate abortion on demand, as they would be less hypocritical and, frankly, less evil than they were that night of May 14.

First, let us not forget that after weeks of being told by "The Man" that Tonya Craft wore thongs everywhere, but at work, his partners-in-crime at the CAC were bragging about having a "Casino Night" fundraiser, complete with girls in...thongs. Yes, yes, after I showed the picture of our "thong girls" with "Elvis" (Can't you do any better than that, as this guy looks about as much as Elvis as I do), suddenly the "thong girls" were shown wearing pink leotards. Somehow, even the liars at the LMJC and the CAC realized that after Tonya's trial, thongs might be a bit much. (Take a gander at "The Man's" newest Facebook page image. Guess this guy is obsessed with females not wearing much clothing.)

Second, remember that this party was supposed to be a celebration of yet another innocent person thrown into prison. (Gee, I guess Tonya is sorry that she spoiled the Perjury Central party, but she had plans other than spending the rest of her life being incarcerated.) Instead, the people at the party claimed they were there "for the children," which is as believable as "The Man" claiming that he is an honest and decent human being.

Maybe people showed up to see the girls in thongs, and were gravely disappointed to see these ladies wearing pink leotards. However, if the prosecution had found a picture of Tonya wearing a pink leotard, I suspect "Alberto-Facebook," "The Man," and "judge" Outhouse would have salivated for the entire trial.

Now, lest we think that everyone at the party had a long face (because they had been unsuccessful in doing that the CAC does best -- destroy innocent lives), think again. Holly "Thumbs Up" Kittle, who apparently must have stayed in a Holiday Inn Express in order to qualify to be a "forensic interviewer," was the photographer of the evening. However, although "Thumbs Up" was the one taking pictures, at least she had her own photo taken with Elvis and the former "Thong Girls."

It gets even better. In this picture, we have not only the former Thong Girls and Elvis, not to mention "Thumbs Up," but we also have Laurie Evans and some others I don't recognize but I am sure have played an important role in promoting Perjury Central: 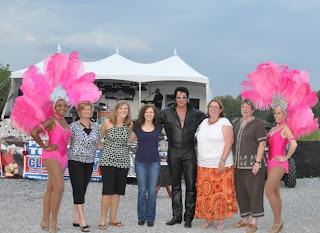 Nonetheless, their smiles hid the disappointment at their lack of success of destroying an innocent life that week, but no doubt there are more opportunities to do evil at Perjury Central. Stay tuned. I am not going away.
Posted by William L. Anderson at 12:01 AM

Mr. Anderson, you've outdone yourself yet again. We don't need television, we don't need movies, we don't need Channel 9, all we need is William Anderson to follow the story of the Lookout Mountain Judicial... Circus.

This organization certainly is a circus - one no one wants to watch let alone experience. No insult to clowns, but I see quite a few on a daily basis when they cross Main Street to dine at the local cafe, that tends to toss out those they don't like without reason and then ban them for life. Not going in there anytime soon!

Several Ringgold High School classes are having a joint reunion in Sept. Guess where they are having it, yes you are right Willow Tree Farm. I was going to go, but because of their support of CAC and others, think I will have to pass.

I am sure we will miss you Trish.

No I am sure you Won't but there may be a day comming that you might.. You all are going to pay one day..

I must be just too old for these times. A fake Elvis and two grown women trying to look like pink flamingos neither interests me nor does it make me want to gamble or pretend to gamble.

I try to be very careful with my donations to charities. Does the United Way support groups like CAC?

Hubby and I did our early voting. Knowles didn't get a vote from us.

These situations have to happen in an environment ripe for cultivation.

Don't delude yourselves into thinking that these individuals will get what's coming to them. For some...maybe. For others...I doubt it.

Remember Ed Jagels had a 26-year career as DA of Bakersfield, CA and when he retired had the luxury of choosing his successor. Onc of his associates even stole court sealed documents to get him elected. Her fate? She became a judge.

Is Buzz Franklin an Ed Jagels. Well, maybe not yet. Give him another 10-15 years.

A couple of the others in that second picture resemble the majority of the 100+ CPS agents I have seen in cases across the nation.

I do not mean to degrade any for being 'plump', but for some reason many CPS agents are.

I have long suspected that there was female jealousy at work in Tonya's case. Tonya is attractive, and she stays in good shape, and compared to the women in that picture, Tonya comes out looking pretty good.

Don't think that these people not above letting petty jealousies help determine how they approach a case. First, they are poorly-trained and they have an agenda. Second, any child if questioned enough and put through an interrogation will tell the CAC worker what she wants to hear.

That is why I call the CAC Perjury Central. They are masters at getting perjured testimony at trial, and none of them care whether or not the testimony is true. They are an arm of the prosecution, and they have that feeling of power. A dangerous combination.

Volfan, about the United Way, I wouldn't give to them either. Remember back in the early 2000s when they cut off funding to the Boy Scouts of America, telling them basically, "Want your funding back, you've got to allow openly gay men into leadership positions in your organization." I used to give to UW, but ever since then, not a nickle from me to them.

I'm all for equal rights, and if a gay person is denied their Constitutional rights, then I'll stand with the gay person. But, there's also something in the 1st Amendment called "freedom of assembly," meaning you have the absolute right to associate with people of your choice. I may not agree with that choice, I man think that choice is based upon bigotry, but you have that right, just like you have the right to say something I don't like. People need to stop being so pissy about other people's rights. Just because you don't like what they say or with whom they associate, that doesn't give you the right to tell them they cannot say it or they have to associate with someone else. Every time I see a Christian like Jennifer Keeton stand up and say, "the Bible says this, and I believe it," all the people who go and say, "You're committing hate speech," every person who tries to shut her down for exercising her right to free speech is just as much a tyrant as Joseph MacCarthy or Joseph Goebels. Jennifer Keeton didn't accuse a gay person of doing anything illegal, she didn't use her position to try to get a person sent to prison for being gay. The same cannot be said about Chris Arnt. HE is a person who TRULY did use hate speech. But, he gets a free pass in the media, and I still haven't figured out why.

Anon. I don't care if you miss me or not. I won't support a place that supports the CAC, LMJC, etc. By the way, I'm not afraid to say who I am,why are you???

One of the individuals in the last picture is Laurie Evans (middle with jeans and blue shirt)! This so-called therapist is still treating children when she is/was a diagnosed mentally ill individual herself. Go to Hamilton County and get her divorce file: you can get her own treatment notes from her therapist: Dr. Solovey. Wow!!! RUN if her name is ever mentioned to treat anyone you know!!! The TN courts/attorneys seem to be running away fast when Laurie Evans name is mentioned. Only Catoosa County would want to keep such an seemingly obvious quack!

As pathetic as the Catoosa County Judicial System, Investigators, CAC, Greenhouse, Sheriff, DA's, ADA's are the Chickamauga School System is right up there with them. The administration needs to be cleaned out and get people who really care about the students and school system as opposed to an "anything goes" for certain families that seem to think they control all. Funny thing is these families are now being shunned so their lies and deceit have seemed to backfire on them. I hope everyone gets what they deserve - INCLUDING THE CHICKAMAUGA SCHOOL SYSTEM!!

Lame - the United Way in Chattanooga and North Georgia does fund the Boy Scouts -
Here is the link that explains their policy. http://www.uwchatt.com/www/docs/1144.171/boy-scouts-gay-policy.html

This is a funding decision that is made by local volunteers and the volunteers in our area voted to continue to fund the Boy Scouts.

arnt and gregor have fb again...they are set to private. i thought they deleated them for a while. gregor's profile pic is a cartoon girl in a nightie...a little racy...pot meet kettle...