Will Campaign Signs Bring Down the Outhouse?

During Tonya Craft's trial, "judge" Brian House acted according to signals given by prosecutor Chris Arnt, and that was the least of his wrongdoing. In a previous post on this farce of a "judge," I listed a number of things that House did, all in violation of the Georgia Code of Judicial Conduct that supposedly governs Georgia judges.

At best, House is a dishonest judge. At worst, he is a criminal.

Because the Judicial Qualifications Commission in Georgia is toothless and because, frankly, people at the Georgia State Bar are completely impervious to wrongdoing by judges and prosecutors, House and his friends have figured that they are invulnerable. That is why House, Arnt, and Len Gregor, along with Tim Deal, figured they could get away with shredding the law during the Craft trial and why House figured that Catoosa County jurors were as craven as were he and his friends.

But now, "judge" Brian House is in hot water with the JQC. Why, as Callie Starnes of WRCB-TV says in her story, it seems that not only did "judge" House have campaign signs in his yard in violation of Georgia's ethics code, but then lied about it when she asked him about the signs:


"A judge, or a candidate for judicial election shall not publicly endorse a candidate for political office," said Jeff Davis, Georgia Judicial Qualifications Commission's Director.

According the Georgia Code of Judicial Conduct, judges are not allowed to publicly endorse a candidate for public office.

But it gets even better. When Starnes confronted House about the signs, he engaged in what law schools call "Kettle Pleading" in which the person being accused tells three different -- and mutually-exclusive -- stories. Here is House's own version of Kettle Pleading:

"Every judge in the state is provided a copy of the code of judicial conduct, and is expected to know it, and expected to adhere to it," he told Channel 3 in a phone interview.

Channel 3 took a copy of the code of conduct when we paid a visit to Judge Brian House's home to ask about the signs.

He changed his story three times.

"I didn't put it there," said House, standing on his front porch Monday.

"I guess Mr. Caldwell did, I didn't put the sign up," he said, when asked who placed the sign on his property line.

"I have no idea who put it up there," House then said when asked if he believed Michael Caldwell would take responsibility for the sign's placement.

House then told us the sign was on his neighbor's property.

Channel 3 talked to Judge House's neighbor, who tells us the sign is not his. He says it belongs to Judge House, and House didn't ask before placing it on the property line.

Granted, this is penny-ante stuff compared to the massive misconduct that "judge" House committed during the Craft trial and his actions that observers have told me occur in other judicial proceedings. In fact, I would say that one would need no more proof than this to declare that the JQC approaches issues in the same manner of which Jesus accused the Pharisees of doing when he told them that they will "strain out a gnat and swallow a camel."

Nonetheless, like Al Capone going down on tax evasion, I would say that anything which calls attention to the fundamental dishonesty and utter lack of integrity that characterizes Brian House is a good thing. Thus, in honor of this latest caper, I would like to present a new symbol for the "judge's" campaign, complete with inside decor: 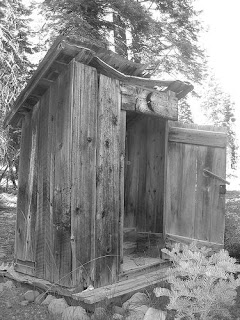 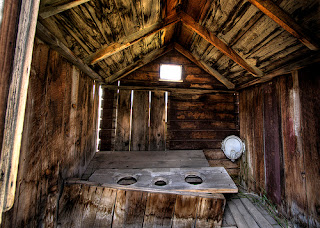 Posted by William L. Anderson at 7:30 AM

Way to go Mr Anderson, All true But he will just get a slap on the wrist if that. I have a problem with these people. They are worse than the ones they lock up. Sad sad.

Is Michael Caldwell the son of Sonny Caldwell? And if he works for Outhouse then surely he knows the "rule" also. Why would he knowingly put it on the property line? I'm surprised Outhouse doesn't have a Gary Sisk sign in his yard also. But I guess he will leave his campaigning to his fellow church goers since they all go there anyway.
Of course channel slime 9 isn't reporting any of this. They're scared to upset the Good Ole Boys.
KUDOS TO CALLIE STARNES she has more backbone than any of those slimebuckets!!!!

Anon 7:55 is probably right. The criminal outhouse has had his previous transgressions, which were far worse than this, completely whitewashed before. There's no reason to think that things will be any different this time, or that any of the denizens of the LMJC will raise a big fuss.

That is funny! I just finished watching a YouTube where House had the campaign sign of his clerk in his yard, and on the building that House uses to rent to another Catoosa County Judge, where a huge banner was across the top of the building for Michael Caldwell. Not only has he been in trouble before, two years ago, he again was doing the same thing.