I recently wrote a post on James K. Galbraith's "In Defense of Deficits," which appeared in The Nation, and Galbraith was none-too-happy with my interpretation, posting his views in the comment section:

The alert reader will catch the distortion in this post. When the public deficit increases, that's an increase in the "net financial wealth" of the *private sector*. Not (obviously) of the country as a whole.

And it's not real wealth either. The word I used was "financial."

It is a claim on future purchasing power, for the private sector. Exactly as stated in my article.

My point is accounting.

Professor Anderson restates a truism as an absurdity, in order to attack it.

Obviously, since he has raised an objection and says that I wrongly interpreted his article, I need to respond, and will try to be fair in the way that I do it. Obviously, my stated opinion that Galbraith, like his father, John Kenneth Galbraith, is "economically-illiterate" is not going to endear me to that family, but this is "business, not personal." John Kenneth openly endorsed socialism, believed that state ownership and control of all facets of an economy would create an economy that would be viable and prosperous.

For example, the elder Galbraith gave effusive praise to the communist regime of the Soviet Union, ironically, just before the regime went out of business, declaring that socialism made the best use of labor. Furthermore, Galbraith openly supported the communist Mao government of China despite the fact that we now know just how disastrous Mao's policies in both the "Great Leap Forward" (when millions of people starved to death) and the "Cultural Revolution."

Even before going into explanations of why socialism as an economic system is bound for failure, we can look directly at the communist regimes -- Cuba and North Korea stand today as stark examples -- and see just how much misery they cause. However, Galbraith would have none of that, and remained a supporter of socialism to his death.

His support of such regimes would fall into two categories. First, Galbraith was a true "Progressive" in which he believed that the educated "elite" should be making decisions for others, and that ordinary people really were incapable of exercising choices for themselves. Second, judging from his personal accounts of heading the Office of Price Administration during World War II, he enjoyed having power over others and believed himself capable of singularly being able to "run an economy." Enough said.

From what I can tell, James is carrying on the work of his father, and if he wishes to do so, fine. However, part of that work is making claims about the economy and economic growth that are not true. I will return to the paragraph I quoted in the earlier post, plus add another one:

To put things crudely, there are two ways to get the increase in total spending that we call "economic growth." One way is for government to spend. The other is for banks to lend. Leaving aside short-term adjustments like increased net exports or financial innovation, that's basically all there is. Governments and banks are the two entities with the power to create something from nothing. If total spending power is to grow, one or the other of these two great financial motors--public deficits or private loans--has to be in action.

For ordinary people, public budget deficits, despite their bad reputation, are much better than private loans. Deficits put money in private pockets. Private households get more cash. They own that cash free and clear, and they can spend it as they like. If they wish, they can also convert it into interest-earning government bonds or they can repay their debts. This is called an increase in "net financial wealth." Ordinary people benefit, but there is nothing in it for banks.

Let's go to the heart of the matter: Galbraith claims that economic growth occurs because of an "increase in total spending." Spoken like a true Keynesian. The only problem is that he does not understand what brings about economic growth. In the Keynesian view, new spending pushes the "aggregate demand" curve to the right, which increases GDP which -- Voila! -- gives us "economic growth," end of discussion.

That is not economic growth, folks, it is growth of a statistical measure called GDP. It is purely quantitative, not qualitative. For example, during World War II, the economic GDP measures showed the economy "growing," but it was a phony economy making war goods. The lot of individuals was not in line with a growing economy, as there was deprivation, rationing, overseas military service where many people lived in squalid conditions, and all of the other horrors that accompany war. Yes, the official rate of unemployment was low, but so was quality of life.

Economic growth occurs when we develop capital that permits us to make more goods using the same or fewer resources per produced unit. It occurs when more and more people have access to goods such as food, shelter, clothing, and other things that make their lives better. The whole of economic growth through the past two centuries has been the development of capital that enables individuals to produce more goods that they believe will meet their needs.

In other words, the key to economic growth has been capital, something that is anathema to a Keynesian, who insists that capital appears like magic as long as there is enough spending. Well, enough said about that. 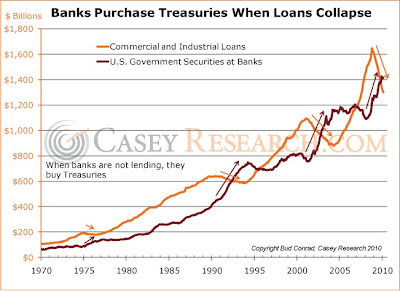 With banks currently borrowing from the Federal Reserve at near-zero rates and then rolling those loans into government bonds, it seems to me that the increase of public debt is in at least the short-term interests of banks, as bank loans for private capital purposes are way down. However, I don't see this as a good situation, for one of the main reasons that there are few prospects in the private economy right now is the government's rampage against productive people and productive firms.

Let's face it; the last thing any firm right now wants to be seen doing is making a hefty profit as the media and political classes are all over such "profiteering." Well, no worry here; the Obama administration is making sure that the burden of government is going to be so heavy that business firms won't be able to be profitable. (Of course, if businesses go under, Obama and his allies condemn that as more "proof" of business malfeasance, but if they still manage to be profitable, well that will be a crime, too.)

There is much else not to like in Galbraith's article, but I don't have access to all of the bytes in the universe to comment on everything. Let us just say that Galbraith falls prey to almost all of the things listed by Lawrence Reed in his classic article, "7 Fallacies of Economics."

In fact, if you wish to have some fun, make a game of it. Read "In Defense of Deficits," then read "7 Fallacies," and then match Prof. Galbraith's statements to the fallacies listed by Prof. Reed. It will be enjoyable and educational, I assure you.
Posted by William L. Anderson at 9:08 AM